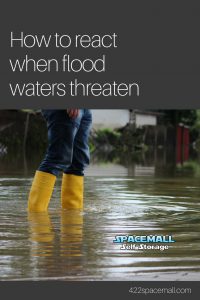 Eastern Pennsylvania has taken a beating from the rain this summer and the hits just keep coming. Last month, Hershey Park and Knoebels Amusement Resort faced flash flooding at the height of the summer tourist season, forcing the parks to close and vacation to be changed.

Yesterday, the King of Prussia mall was inundated with flash flood waters on the lower level and though the water wasn’t deep inside the mall, in the parking areas and the surrounding roadways it was deep enough to force water rescues of motorists who didn’t know the basic rules of dealing with flooded roadways or who underestimated the depth of the pooled water.

So what should you do when water covers the roadway or the parking garage?

What if your home or business is threatened by flood waters? Do you know what to do, where to go and how to evacuate?

I learned this lesson the hard way as a 20-something on my first job. I was a reporter back then and trying to go out in the midst of a storm to check tornado damage at the local high school. The problem was i was new to the community and didn’t know that some intersections sloped down. I drove my car into what I though was a little water and soon the water was over the hood of the car and the car stopped moving forward. It also stopped running and wouldn’t turn over again, so backing out of this now waist-deep water wasn’t an option.

I climbed out the window of my car and held on to the car against the current of the water to get out of the water and hiked back to my office. I got lucky. I could easily have been swept under by the current or trapped inside the car. When the tow truck recoved my destroyed car the next day, there was mud on the roof.

If you cannot see the bottom of the ponded water, don’t drive through it. In fact, the best choice is to avoid ponded water altogether. If it gets into your engine, the car can be damaged or destroyed and more importanly you can become trapped with water rising around you. When water covers the road, turn around, don’t drown.

Flash floods happen unexpectedly, yes, but often there is a warning that the storm is producing large amounts of rain or the weather service will mention that the ground is saturated from all the previous storms. Just like you would with a winter storm, pay attention to what the forecasters are saying and know your surroundings. Know if you live or work in a low-lying area or if you drive through them on your way to places that you often visit.

Last night, the Schuylkill River in Upper Providence at the end of Brower Avenue was out of its banks. Where 422 Spacemall sits up on the ridge overlooking the river, we were far above the flooding, but the Upper Providence Fire Department was using our parking lot as a staging area to stop people from heading around the curve and down to the river where the water was lapping at the driveway of Rapid Recycling and other nearby businesses.

A few of our customers were inconvenienced because the firefighters would not let them go on down the road to the next driveway also on our property. They area those customers needed to traverse was not in danger, but they listened to emergency personnel because it’s the smart thing to do.

Know where you can get dry storage if you need it.

Despite all the water coming down in the last few weeks, Spacemall storage remains dry. We’re up on the ridge here in Oaks, so flood waters don’t reach us. When they threaten you property, bring it on over and store with us. we’ll help keep you dry.